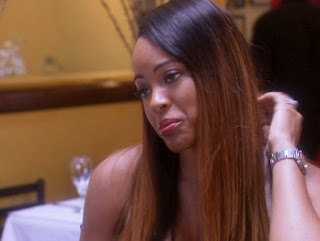 Some folks just need to try harder than others to make themselves relevant...like Malaysia with that whole made up, silly, 'if my friend don't like you, neither do I' high school 'code of the streets' beef she's trying to have with Brooke. Don't look at me like that, Malaria! Oh...that's right...she can't help it. LOL! Don't she have one of them looks though, that if you were in an argument with her, you would want to smack her?!? But don't let them giant veneers & that bougie foreign country name fool ya! Don't forget Malaysia is her MIDDLE name...her gubment name is LaQuisha & she's straight outta Compton, sweetie! Don't get it twisted...like that oogly doily headband she had on yesterday! & you know you need to second guess something if Grandma Jackie likes it! HA! Still, that mess is petty! I'm liking ol' Brooke more & more as the episodes go on...Love that she checked Macedonia & her friend with,"If you're 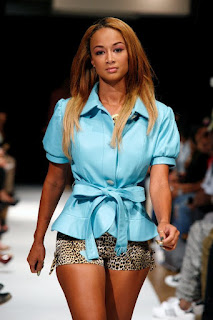 wanting to fight over a man, you've already lost!" Check, please!! Woooh! She ain't told nothin' but the truth, bless her big eyeballs! Her peripheral vision gotsta be off the chain...lookin' like Bambi...the deer, y'all! SMH! Anyhoo...Jackie's daughter's coming back! And her loco mama ain't even have to fake her own death to manipulate her neither. Whaaaat?!? I guess it's true...There's a love for your mother that's like none other!......I think she just underestimated the cost of living alone. That's it. That's all! Let her save up some paper...She'll be gone again...Prolly further away to...like...Malaysia! HAAA!!! I want Jackie to stop tellin' folks she's a model. You WERE a model, you walkin' insane asylum! Now you're just taking pictures with Bengay rubbed all over your wrankly self! Need tah be modelin' straight jackets for Shady Groves Mental Hospital..."I'm not only a spokesperson...I'm a client too!" & the branding on her ham hock-as Draya so eloquently put it ....with the over the top hug for the tattoo artist...My face was just like Draya's...I can't! Speaking of can't....I can't take scenes like the one with Draya & Gloria. I was like Chris Brown in a room full of Women Against Domestic Violence Activists...UN-COM-FORT-ABLE! Okaaaay! Matt got Gloria so messed up that she's about to forget the ball & go straight for the basket! SMH! The foolery! Welp...Like Jackie's old jugs of curdled milk in EVERY scene, I'm OUT! HOLLA!!!

So you are one of the brave ones...Come on in...I've been waiting for you!!